What is Familial TAAD?

How common is Familial TAAD?

What are the features of Familial TAAD?

What kind of testing will I need?

How will I be treated for Familial TAAD?

How does Familial TAAD affect my ability to start a family?

What are the signs and symptoms of an acute aortic dissection?

Where can I learn more about Familial TAAD?

What is Familial TAAD? 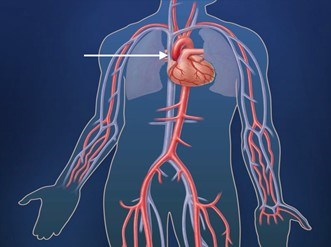 Figure 1. The aorta and its branches. The arrow points to the ascending aorta. (Courtesy of Mayo Clinic).

Figure 2. A. Circulatory system demonstrating aneurysm of the ascending aorta (arrow).  B. Close up of an aortic root aneurysm (arrow) (Courtesy of Mayo Clinic). 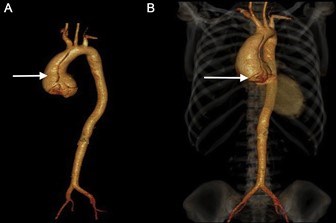 There are many causes for thoracic aortic aneurysms (Figure 4). 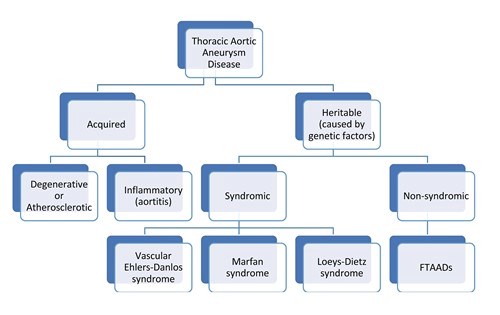 When thoracic aortic aneurysms are caused by hardening of the arteries (degenerative or atherosclerotic aneurysms), inflammatory or infectious conditions (called aortitis), they are called acquired aneurysms.  However, aortic aneurysms in the chest can also be caused by genetic mutations, which are uncommon differences or changes in someone’s genetic code.  Familial TAAD follows an autosomal dominant inheritance pattern. This means that when a parent has the condition, there is a 50% chance of passing on the same trait to each child (Figure 5). In Familial TAAD, there can be a variable age of onset for thoracic aortic aneurysms in a family.

Figure 5. Genetic pedigree of a family with Familial TAAD demonstrating the autosomal dominant pattern of inheritance. (courtesy of Geneticsupport.org) 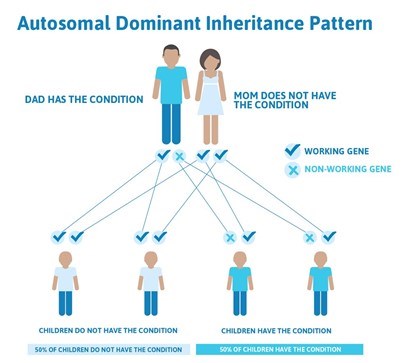 When multiple family members have thoracic aortic aneurysm (i.e., familial pattern), but don’t have the physical features of a syndrome, it is clinically classified as Familial Thoracic Aortic Aneurysm (FTAA).  Some people also call this Familial Thoracic Aortic Aneurysm and Dissection (FTAAD) to highlight the risk of aortic dissection.  This same condition may also be referred to as nonsyndromic hereditable thoracic aortic aneurysm disease (HTAD).

When people with FTAA have genetic testing, a mutation (pathogenic variant), or harmful change in a gene, may be found.  However, a mutation is not always identified in these families—even when there is a clear pattern of inheritance in the family.  This is most likely because the genetic testing that is done today is not able to identify every possible genetic change leading to aneurysm disease.  New mutations that explain FTAA continue to be discovered by researchers.

How common is Familial TAAD?

Familial TAAD is estimated to be the cause of at least 1 out of every 5 thoracic aortic aneurysms and dissections. It is difficult to know how often this condition occurs in the population because aneurysms usually don’t cause any noticeable symptoms until dissection occurs and because the familial pattern may not be recognized. Almost 30,000 deaths in the United States are caused by aortic disease (including ruptures and dissections) each year, and it is not known how many of these are Familial TAAD cases

What are the features of Familial TAAD?

In evaluating the individual for suspected Familial TAAD, it is important to compile a careful family history.  One should ask about any aneurysm disease (cerebral, thoracic, and abdominal) or unexplained sudden death occurring in parents, siblings, and children as well as in more distant relatives (such as aunts, uncles, grandparents, etc.). As described above, Familial TAAD usually occurs without a consistent pattern of additional physical changes which are recognizable on a physical examination. However, people with Familial TAAD may have mild features that are often found in other connective tissue conditions. These features may include, but are not limited to, flexible joints and mild curvature of the spine (scoliosis). Some people with specific types of Familial TAAD, such as that due to ACTA2 mutations, may have a finding on the skin called livedo reticularis (a lacy pattern of the veins on the skin) or a special eye condition called iris flocculi (which requires a slit lamp eye exam for recognition). Since many people do not have obvious features, the diagnosis is not often discovered early in life. Familial TAAD is often diagnosed after an aortic dissection occurs, when a thoracic aortic aneurysm is discovered during imaging (such as an echocardiogram, CT, or MRI) performed for other reasons, or when family members of a relative with an aortic dissection or aneurysm are being screened.

Some of the genes that cause Familial TAAD have been identified and, in some cases, there may be patterns on examination of the individual or on vascular imaging that are clues to a specific gene mutation.  Researchers are working on new ways to determine features that are relevant to the different genes causing Familial TAAD.

What kind of testing will I need?

Familial TAAD is suspected when there is a pattern of thoracic aortic aneurysm in your family. Familial TAAD is also often suspected when a person in the family has a thoracic aortic aneurysm or aortic dissection, especially when young, and there isn’t evidence for a syndrome or other obvious cause.  While these are reasons you may suspect FTAA, it is important for you to see a doctor for evaluation.  Cardiovascular imaging (such as an echocardiogram (Figure 6), CT scan (Figure 7) or MRI) and genetic testing (as appropriate) are important tools in the evaluation.  Echocardiograms or CT scans are performed on the first degree relatives (parents, siblings, and children) of the person with a thoracic aortic aneurysm to determine if there is any aortic enlargement.  Genetic testing may be performed, but it is important to have genetic counseling to fully understand the results. You will be informed about the possibilities, consequences, and drawbacks of genetic testing prior to the study.  You should also receive appropriate information on the interpretation of the genetic test result afterwards. 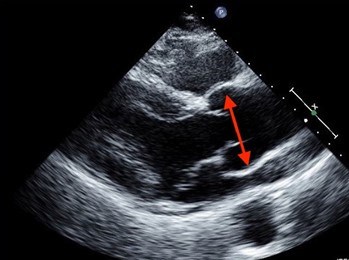 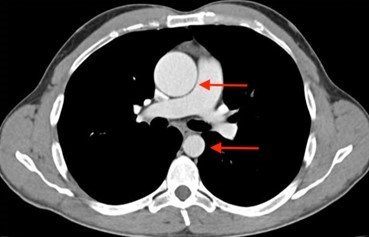 Even if your genetic testing is negative, meaning no changes were found in the genes associated with Familial TAAD, you may still have the disease.  Researchers are still trying to identify more genes that cause Familial TAAD.  Therefore, even if you are not found to have a gene mutation known to cause your thoracic aortic aneurysm, your first-degree relatives should have imaging tests to determine if anyone else in the family also has a thoracic aortic aneurysm.  When Familial TAAD clearly runs in a family, but no gene mutation is found, relatives of the affected person must have periodic screening for aneurysms throughout their lives, too.

Besides imaging the thoracic aorta, people with Familial TAAD should undergo periodic screening of other arteries, including those in the brain, abdomen, and pelvis.  This is because gene mutations causing FTAA may occasionally lead to aneurysms in other blood vessels.

How will I be treated for Familial TAAD?

Your treatment for Familial TAAD will be based upon the latest information available.  It will consist of important strategies:

Your doctors will decide whether you need surgery based upon your symptoms, the specific genetic mutation causing the Familial TAAD, the rate of aortic growth, your family history, and, most importantly, the diameter of your aorta.  Once the aorta reaches a critical size, aortic root and/or ascending aortic replacement surgery is recommended.  This is open heart surgery.  A heart surgeon will replace the aortic root and/or the ascending aorta with a synthetic graft.  In this surgery, your own aortic valve may be sewn inside the graft (known as a valve sparing root replacement) (Figure 8), or you may receive an artificial heart valve along with the graft (known as a composite valve graft or Bentall procedure) (Figure 9). If you are given a new valve, it will likely be a mechanical valve.  A mechanical heart valve requires treatment with a blood thinner (anticoagulant) called warfarin.

Figure 8. Valve-sparing root replacement procedure. A. aortic root aneurysm (arrow); B. the aneurysm is removed; C. The aortic valve is reimplanted within the surgical graft; D. the graft is sewn to the normal aorta distally (courtesy of Craig Miller, MD) 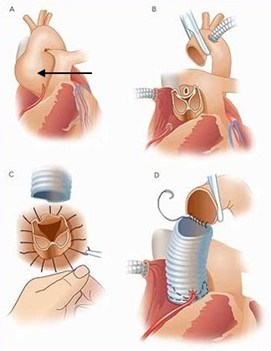 Figure 9. Composite aortic valve and root replacement (Bentall procedure). A mechanical aortic valve prosthesis (arrow) is at the proximal end of the graft and the coronary arteries are reattached to the graft (courtesy of Mayo Clinic) 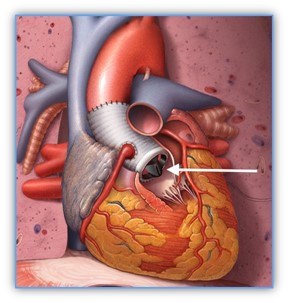 Currently, physical activity guidelines are based on research that has been done on syndromic and acquired thoracic aortic aneurysms.  We do not have data to recommend specific activity guidelines for people who have a mutation in each of the specific genes known to cause Familial TAAD.

You need to discuss physical activities and activity levels with your physician so you can safely exercise. As you get older, you should keep talking with your doctor about exercise as your health may change.

However, general guidelines for physical activity include the recommendations for low to moderate levels of aerobic exercise depending upon your specific circumstances.  It is recommended to avoid competitive and contact sports and to recognize that the increased blood pressure can put added stress on the aorta.

How does Familial TAAD affect my ability to start a family?

Currently, pregnancy guidelines are based on research that has been done on syndromic and acquired thoracic aortic aneurysms.  We do not have data to recommend specific pregnancy guidelines for people who have a mutation in each of the specific genes known to cause Familial TAAD.  However, when the aorta is dilated, a woman with Familial TAAD will be at even higher risk of aortic complications during pregnancy.  You should discuss with your cardiologist and geneticist before becoming pregnant.  Pregnancy in women with Familial TAAD is considered high-risk  and you should have an evaluation by a maternal-fetal medicine specialist or high-risk obstetrician and cardiologist during pregnancy.  If you do become pregnant, a beta blocker such as metoprolol may be used to lessen the stress on the aorta during pregnancy.  Echocardiograms are recommended during pregnancy and methods to lessen the blood pressure during labor and delivery, such as epidural anesthesia, avoiding pushing, and consideration for a cesarean section delivery (depending upon the circumstances), may be recommended.

In addition to careful assessment of the risk for women contemplating pregnancies, couples in whom the underlying genetic defect is known may consider prenatal or pre-implantation diagnostics.

What are the signs of an acute aortic event? What should I do if I experience one?

Aortic dissection (a tear in the wall of the aorta) (Figure 3, above) is very dangerous and must be treated as soon as possible.

We think there are probably 5,000-10,000 dissections a year in the United States. However, it is likely that many dissections are reported as a "heart attack" or "sudden death," when the cause is actually a dissection.

It is important to know the signs of an aortic dissection and what to do.

Signs and symptoms of acute aortic dissection may include:

A medical alert bracelet can raise alert emergency personnel right away that you are at risk for a life-threatening dissection. It is also beneficial to have your medical records quickly available, such as through Backpack Health, an app for your smartphone. The link to your emergency information in your “backpack” can be added to your medical alert jewelry for easy access.

Where can I learn more about Familial TAAD?