What is bicuspid aortic valve (BAV)?

How common is a bicuspid aortic valve?

What are the features of a bicuspid aortic valve?

What are the genetics of a bicuspid aortic valve?

What testing will I need?

How will I be treated for a bicuspid aortic valve and/or ascending aortic aneurysm?

How does having a bicuspid aortic valve/TAA affect my ability to start a family?

What are the signs and symptoms of an acute aortic event?

Where can I learn more about bicuspid aortic valve?

What is Bicuspid Aortic Valve? 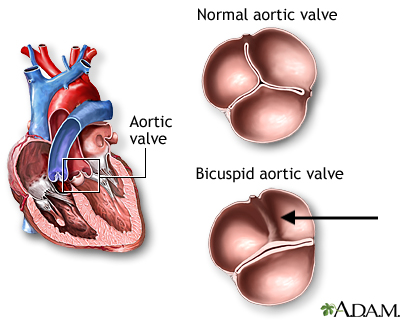 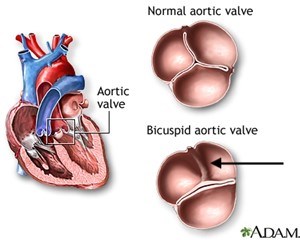 Figure 1. Normal aortic valve and a bicuspid aortic valve with fusion of the left and right coronary cusps (arrow)

BAV is one of the most common congenital heart valve disorders (present at birth) and occurs in about 1 out of every 100 births. It’s about 2 to 3 times more common in males than females. Because a BAV leads to abnormal aortic valve function, the majority of people with a bicuspid aortic valve will have to undergo heart surgery to replace (or repair) the abnormal valve at some point in their life. This condition can lead to aortic regurgitation or insufficiency. This is when some blood finds its way back into the heart instead of being pumped to the rest of the body. In some people, a severely leaking aortic valve causes symptoms when the affected person is young. More commonly, the BAV slowly develops a gradual thickening of the valve leaflets over time leading to a progressive narrowing or restriction of the valve opening (aortic valve stenosis). When a severely narrowed (or stenotic) BAV leads to a weakening of the heart muscle or causes symptoms such as shortness of breath, chest pain, or fainting spells, the valve must be replaced. When a severely leaking or regurgitant bicuspid valve leads to symptoms or to progressive heart enlargement, the valve must be replaced (or repaired).

In some people, the bicuspid aortic valve is also associated with thoracic aortic aneurysm disease. The aorta is the largest blood vessel in the body and carries oxygen-rich blood away from the heart to the body (Figure 2). The aorta arises from the heart above the aortic valve to form the aortic root and ascending aorta and curves toward the back at the aortic arch and descends in front of the spine (called the descending aorta) to the abdomen (abdominal aorta), eventually dividing to form the two arteries to the legs. The normal aorta is about 30 to 35 mm (almost 1.5 inches) in diameter at the beginning in the ascending aorta and it gets smaller the farther it is from the heart. When the aortic size is at least 50% larger than normal, it is called an aneurysm. Bicuspid aortic valve is associated with aortic enlargement and aneurysms of the ascending aorta (Figure 3). 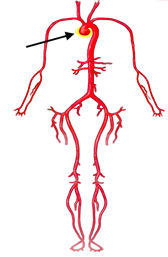 Figure 2A. Circulatory system demonstrating aneurysm of the aortic root (arrow) (courtesy of May Clinic) 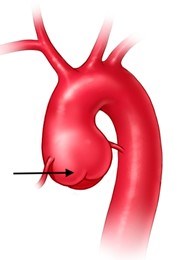 Figure 2B. Close up of an aortic root aneurysm (arrow) 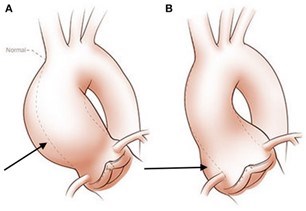 There are different reasons why a BAV can lead to the development of an aortic aneurysm. First is the hemodynamic theory; the abnormal shape of the BAV leads to increased turbulence of the blood being pumped from the heart into the aorta. Instead of being ejected normally into the aorta, the blood is pumped more towards one side of the aorta. This can lead to an increase in stress on that aortic wall (often the outer curvature), and over time, this abnormal stress can make the aorta weaker (Figure 4). This in turn can lead to aortic enlargement or even the formation of an aneurysm. 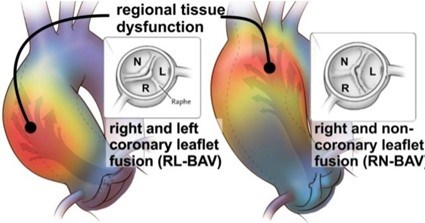 Another theory for why BAV may be associated with aneurysms of the aortic root and/or ascending aorta is known as the genetic theory. BAV may run in families, meaning when one family member has a BAV, the chance of another family member having the condition is higher than in the general population. There is almost a 1 in 10 chance for a first-degree relative (such as a parent, sibling, or child) of the person with a BAV to also have a BAV. In addition, the presence of both a BAV and thoracic aortic aneurysm may also run in the family. In some of these families, a specific mutation in a gene is present which leads to the BAV and aneurysm disease. However, in most families with a BAV (with or without a thoracic aneurysm), genetic testing does not find a mutation in a specific gene. Even though most people with a BAV and an aneurysm will not have a family history of this condition, it is important to evaluate all first-degree relatives (parents, siblings, and children) for this possibility with an echocardiogram.

Even when a BAV and thoracic aortic aneurysm disease runs in a family, a specific mutation in a gene responsible for this condition is not usually found in the family. Familial TAAD (thoracic aortic aneurysm and dissection) may have an increased chance of having a BAV. Mutations in ACTA2, MYH11, MAT2A, and LOX genes have been found in a small number of individuals with familial TAA and BAV disease (Figure 5). In addition, people with Loeys-Dietz syndrome due to mutations in TGFBR1, TGFBR2, SMAD3, TGFB2, and TGFB3 have a higher chance of having a BAV than the general population.  In some people with a BAV and aneurysm, the enlargement of the aorta is largest and most pronounced at the very beginning of the aorta in the aortic root. People with aortic root aneurysms may have a higher chance of finding a specific genetic mutation responsible (Figures 3 and 8). 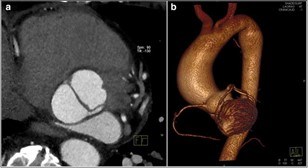 Figure 5. A. CT scan demonstrating a BAV B. Ascending thoracic aortic aneurysm in a person with a BAV and MYH11 mutation (from J Transl Med 2016 14 115 Poninska et al) 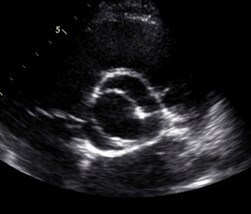 Figure 6. Transthoracic echocardiogram of a BAV demonstrating the oval-shaped opening of the valve 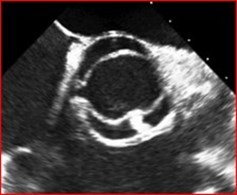 Figure 7. Transesophageal echocardiogram of a BAV 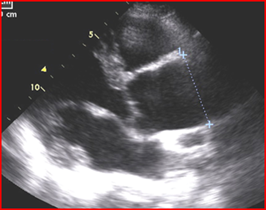 Figure 8. Transthoracic echocardiogram of an ascending aortic aneurysm associated with a BAV 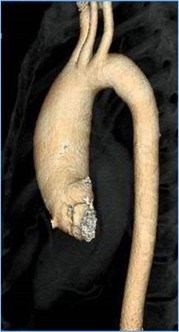 Figure 9. 3-dimensional reconstruction of a CT angiogram showing an ascending aortic aneurysm in a person with a BAV (Courtesy of Mayo Clinic) 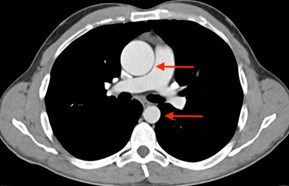 Because BAV with thoracic aortic aneurysm is a risk factor for a tear in the aortic wall (aortic dissection), aortic surgery to replace the aortic root and/or ascending aorta is recommended when the aorta reaches 5 to 5.5 cm in diameter, depending upon individual circumstances. Surgery at 5 cm or more should be considered for those with a family history of aortic dissection, those with rapid aortic growth rates (more than 3-5 mm in a year), or if the operation can be performed at low risk in a center of excellence (a cardiac surgeon and hospital that has a lot of experience with these type of surgeries). Other risk factors for BAV-related aortic complications include the presence of coarctation of the aorta, a congenital defect in which the descending aorta is narrowed or constricted. If a specific gene mutation is found responsible for BAV with aneurysm, then the genetic condition may influence the timing of aortic aneurysm surgery.

How common is a BAV?

Bicuspid aortic valve is present in about 1% of the population. It is 2 to 3 times more common in males than in females.

What are the features of a bicuspid aortic valve? 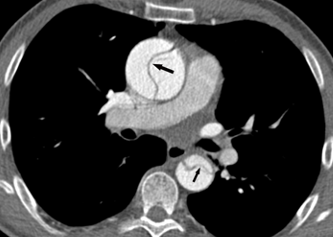 What are the genetics of a BAV?

In most cases, a bicuspid aortic valve and thoracic aortic aneurysm occurs by chance and a specific genetic mutation responsible for the condition is not discovered or present. When someone has a BAV, there is a 9% chance of a first-degree relative (such as a parent, sibling, or child) also having a BAV. In some families, BAV and aortic root and/or ascending aortic aneurysm run in the family. Therefore, it is recommended that first-degree relatives be evaluated with an echocardiogram (and sometimes with a CT or MRI scan) to see if BAV and aneurysm is present. Mutations in some genes associated with familial or hereditary thoracic aortic aneurysm disease may also be associated with a BAV. These include ACTA2, MAT2A, MYH11, LOX, and the Loeys-Dietz syndrome family of genes (TGFBR1, TGFBR2, SMAD3, TGFB2, TGFB3).

What testing will I need?

How will I be treated for a BAV and/or ascending aortic aneurysm?

How does having a BAV/TAA affect my ability to start a family?

What are the signs and symptoms of an acute aortic event?

There is a very low risk of acute aortic dissection when a BAV is not accompanied by a thoracic aortic aneurysm. When significant aortic enlargement or aneurysm is present complicating a BAV, there is a risk of aortic dissection (or a tearing of the wall of the aorta) (Figure 11 and Figure 12). Symptoms of an acute dissection typically include the abrupt onset of a severe pain in the chest, back, neck, and/or abdomen. The pain may be described as sharp, severe, or tearing and may be associated with shortness of breath or a sense of doom. Immediate medical attention is required with imaging of the aorta (typically by a contrast CT scan) to determine if an aortic dissection is present. Aortic dissection involving the ascending aorta requires emergency cardiac surgery. The aortic valve may require replacement at the same time. 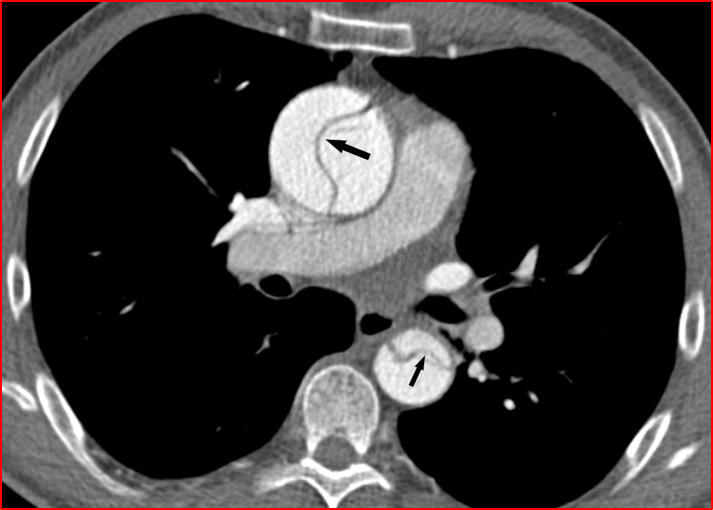 Where can I learn more about bicuspid aortic valve?